Le Dézaley
CAN BE TASTED ON FOOT, TOO!
Cross through the Portes du Dézaley

Walking is the best way to immerse oneself in the beauty of Dézaley. The vignerons in the appellation area have made a lovely and easy loop that takes about 1 hour and 50 minute, featuring five metallic framed entryways. So many emblematic place names, spots that offer sublime viewing points which look out over the lake and the Alps, where you can discover these exceptional vineyards that are suspended between the Earth and sky.

The itinerary is easily reached on foot from the CFF/SBB rail stations in Cully, Epesses, Chexbres, Grandvaux and Rivaz. Or why not go to Cully and Rivaz by lake, on one of the sumptuous old CGN steamboats from the Belle Époque? 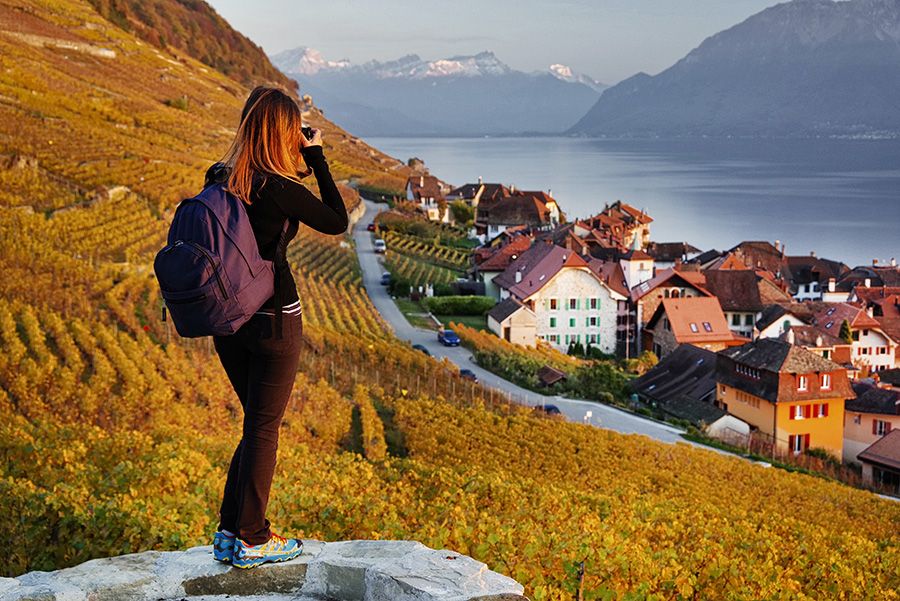 A JOURNEY TO THE HEART OF A WORLD-RENOWNED HERITAGE

This place marks the boundary between the two most prestigious appellations in Canton Vaud. The government of Canton Vaud 21 March 2013 responded favourably to a request by the Vaud Wine Interprofessional Commission to award AOC Grand Cru

A few metres from the Capite à Antoine, a lovely spot for a picnic, with a table and benches: it offers some welcome shade for summer hikers. The Savorettaz is a place-name spot which offers a lovely view towards the Tour de Marsens.

From the top of this hillside, 34 million years are contemplating you. It was during these times long ago that the puddingrock and molasse met and were married here. Then when the Alps rose up the hillside was created, with its flank to the sun. Its rocks, looking as if they were hammered into shape, carry the traces of the retreat of the Rhone glacier.

From here the slope of Dézaley is at its steepest gradient, offering an extraordinary view over Lake Geneva. Turning, on sees the Notre Dame cross that marks the spot as a place of pilgrimage for centuries.

The place where Route de la Corniche and Chemin du Dézaley meet is a place-name spot known as La Chapotannaz. Many horse-drawn trailers passed this way, carrying wine, en route to German-speaking Switzerland during the occupation by Bern. 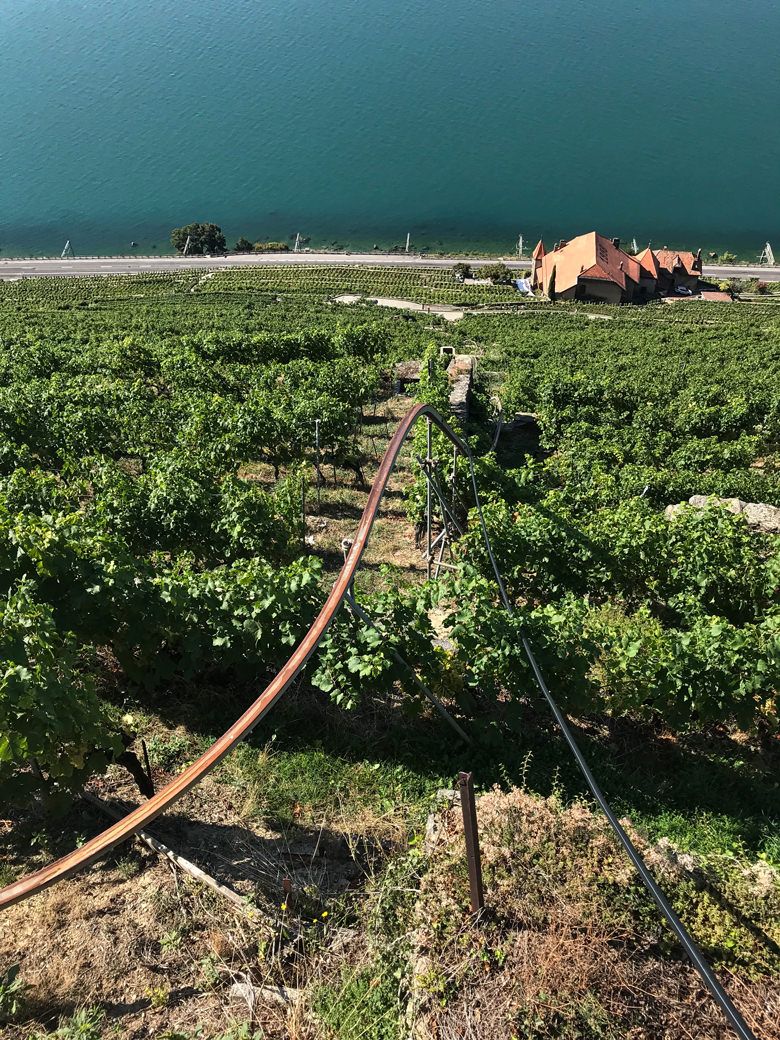 Discovering the terraces of Lavaux,
from Cully to Rivaz

From the train station in Cully follow the yellow hiking trail signs for “Terrasses de Lavaux” on the north side of the rail tracks, heading in the direction of Vevey. After a few hundred metres the path begins to climb. Below the village of Epesses, you cross the trail that leads to the Epesses train station. Carry on straight along the Chemin du Calamin, which quickly takes you to the first door, Porte 1, which marks the intersection of the Chemin du Calamin and Chemin du Dézaley, the only two AOC Grand Crus in Canton Vaud.

From Rivaz (reached by the CFF rail station or the CGN dock) you climb to the village, up to the central Place; when you have found the school and its bell, you head west. After a small descent, over the bridge that crosses the Forestay stream, you climb again to the entrance to Dèzaley, where the Chemin du Dézaley and Chemin de la Dame meet (Porte 2). You also have the option to rejoin Porte 2 from the Vinorama, where a lovely staircase will take you to the departure point, going along the Forestay and its waterfall – at times quite powerful.

The Lavaux vineyards owe their fame to the “three suns” that provide the vines with light and heat. The first comes from the sky, the second is its reflection by the lake and the third is the heat absorbed by the stone walls during the day and diffused during the night.

We recommend that you use good protective creams against these three suns and make sure you have enough water to last you the length of your walk!

Access
By train to Cully, or by CGN boat during the operating season. Return by train or boat.

Map
From Lavaux, or get the regional map, available in the Montreux-Vevey Tourism Office. Also downloadable at www.montreuxriviera.com 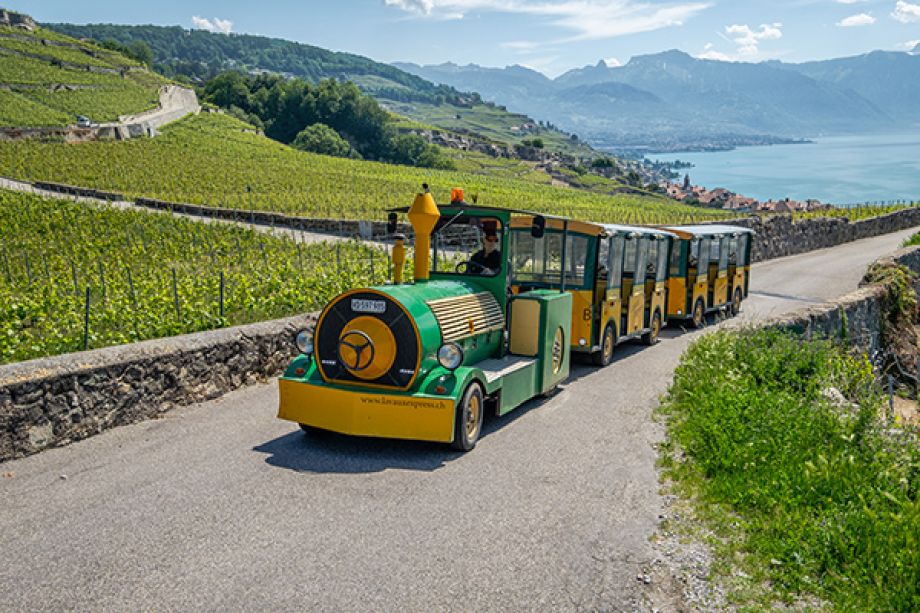 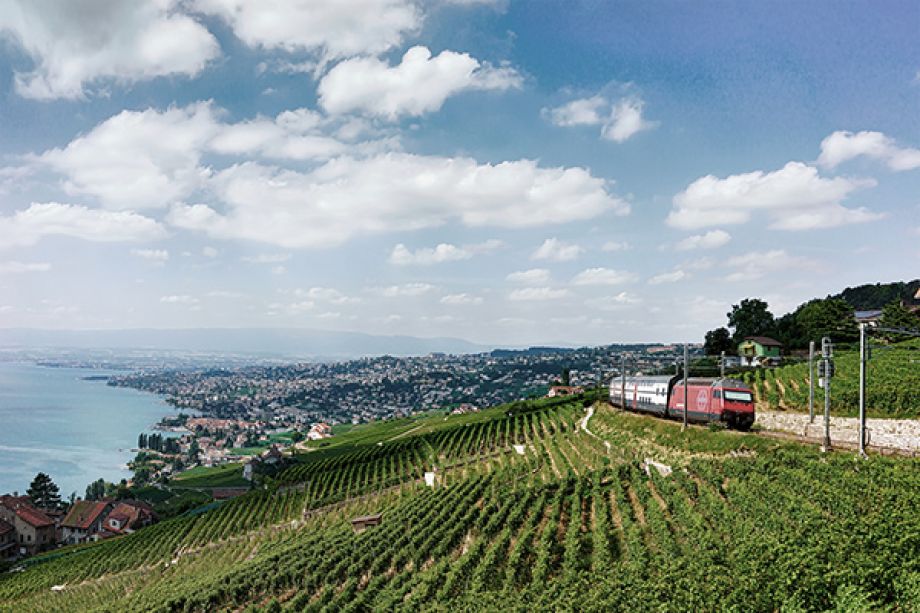