From porte to porte 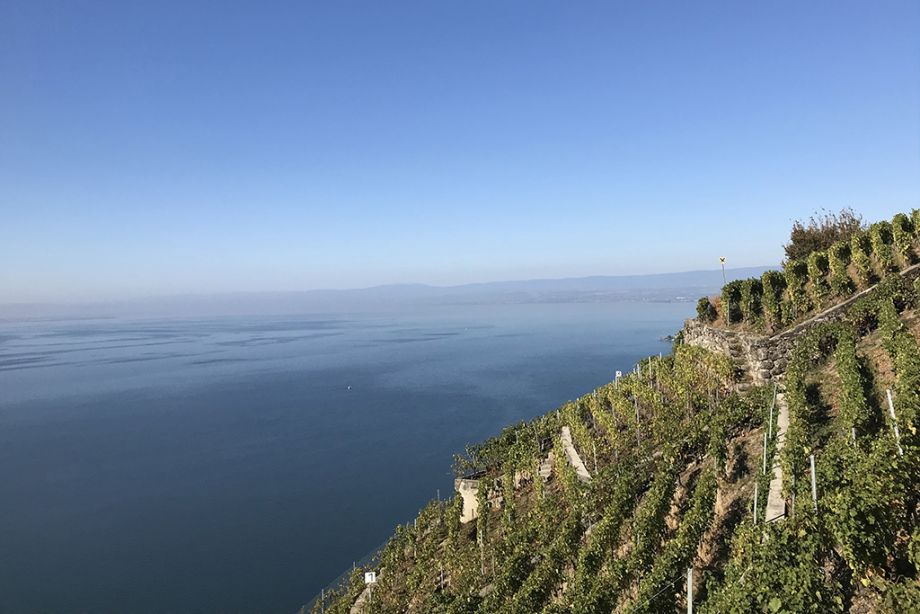 This place marks the boundary between the two most prestigious appellations in Canton Vaud. The government of Canton Vaud 21 March 2013 responded favourably to a request by the Vaud Wine Interprofessional Commission to award AOC Grand Cru (appellation d’origine contrôlée) status to the Dézaley and Calamin vineyard zones. The two zones’ special location and situation were renowned throughout their history and anchored in Vaud’s legal system since 1949, although it was somewhat overlooked in the 2009 revision of the law. The very special terroir of these two regions was also recognized in a study of Vaud wine terroirs published in 2004 under the aegis of several scientific and administrative bodies. 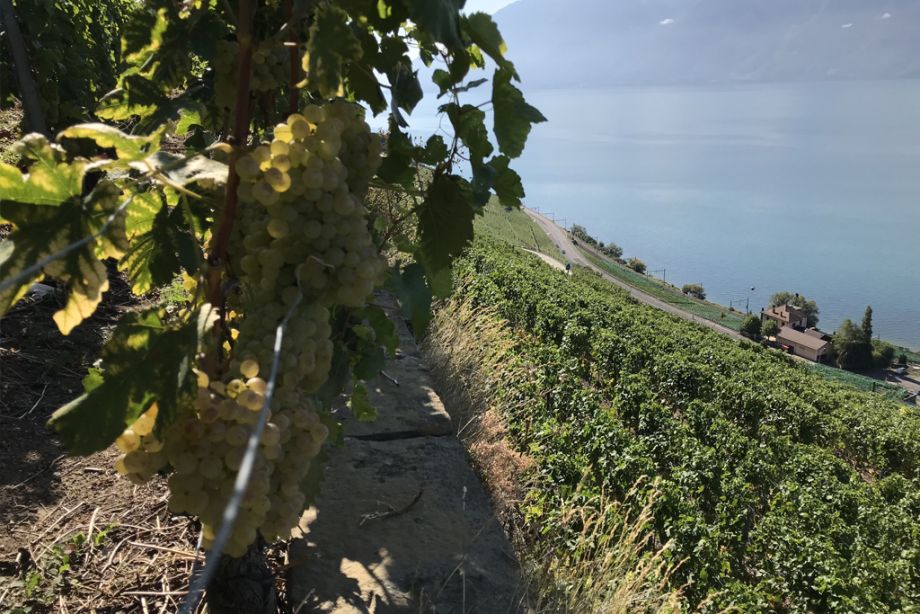 A few metres from the Capite à Antoine, a lovely spot for a picnic, with a table and benches: it offers some welcome shade for summer hikers. The Savorettaz is a place-name spot which offers a lovely view towards the Tour de Marsens.

While it was listed in 1272 as a property belonging to the bishop of Lausanne, the Tour de Marsens certainly dates back to the 12th century: the name “Marsens” appeared for the first time in an 1166 charter, where a house is noted (domum de Marcens). It is therefore possible that Bishop Landri de Durnes built th tower, around 1160. He gave the domain’s land to the Humilmont Monastery founded by the Lords [or is Sires part of a proper name, Sires de Marsens] of Marsens in Gruyères. The tower seems to have been used as a refuge for the monks, but they were never the owners.

In 1527 the tower underwent a major transformation, at the time when it was acquired by Jean de Plait, who was named a noble at the same time. From serving as a defensive structure, it became a habitation. Between the end of the 16th century and the 19th, the tower belonged to members of the Clavel family in Cully, who were the last lords of Marsens. Little by little, they left the building to fall into decrepitude.

In 1879, François Naef, a pastor and historian in Lutry, bought the tower to save it from falling into final ruin. He decided to create the inner door, to facilitate access to the inside of the tower during restoration work. He undertook the first works with the help of his nephew Albert Naef, well-known cantonal archaeologist.

In 1946, the façade was restored and, with help from the public authorities, a protected area where construction was forbidden was created in order to give the Tour de Marsens the fine setting it deserved.

A family foundation was created in 1969 by Bernard Naef and Suzanne Route (daughter of Henri Naef, historian, to conserve the Tour de Marsens setting and to maintain the building that sits there, in order to maintain the historic and artistic integrity of the place. 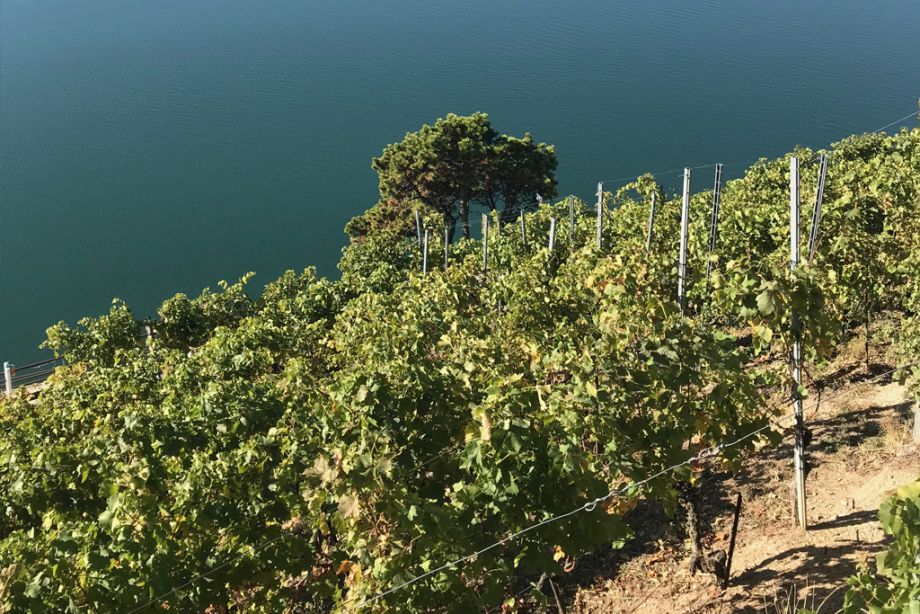 From the top of this hillside, 34 million years are contemplating you. It was during these times long ago that the puddingrock and molasse met and were married here. Then when the Alps rose up the hillside was created, with its flank to the sun. Its rocks, looking as if they were hammered into shape, carry the traces of the retreat of the Rhone glacier. The steep gradient of Dézaley didn’t discourage the Cistercian monks, who planted here the first Lavaux vines, in the 12th century. The support the vines and hold the earth on this very steep slope the monks built more than 400 kilometres of walls, which were in some places higher than 15 metres. These rocks, emblematic of the Dézaley landscape, also nourish the vines by capturing and retaining heat from the sun.

The work took two centuries for the Cistercian monks from the Haucrêt des Tavernes monastery, under orders from the Bishop of Lausanne Guy de Maligny, to create this beautiful vineyard area of 54 hectares in the Dézaley Grand Cru appellation. 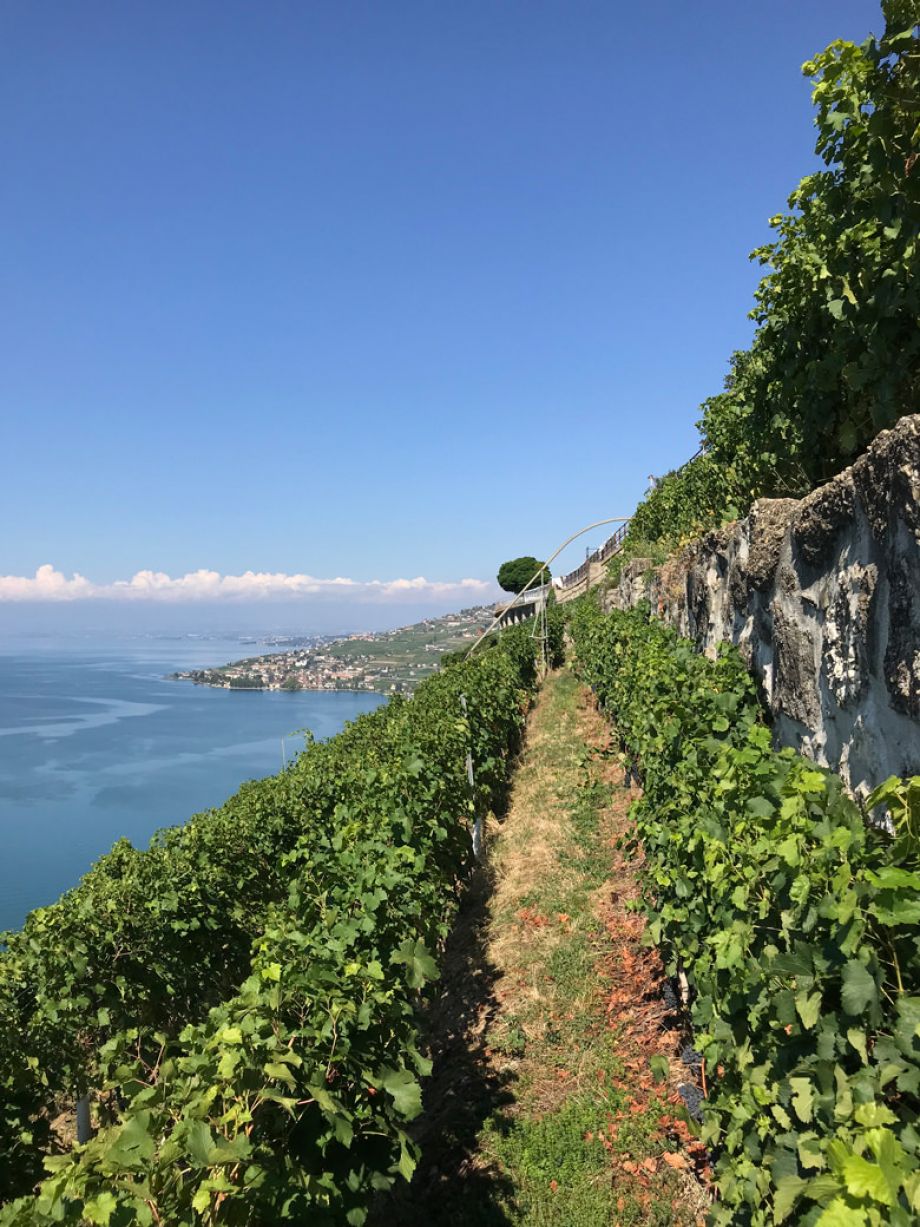 From here the slope of Dézaley is at its steepest gradient, offering an extraordinary view over Lake Geneva. Turning, on sees the Notre Dame cross that marks the spot as a place of pilgrimage for centuries. The 25th of March, the feast of the Annunciation to Mary, was celebrated in the Lausanne Cathedral with a large gathering. But for reasons of distance as well as safety because the roads were infested with robbers, large numbers of pilgrims came to this high spot, where they could see the cathedral. Until the 19th century, Protestants and Catholics continued to come here and to pray. In 1975, when the cathedral celebrated its 700th anniversary, the two Churches put up the iron cross that is there today, to honour this spot that is so symbolic for ecumenism. 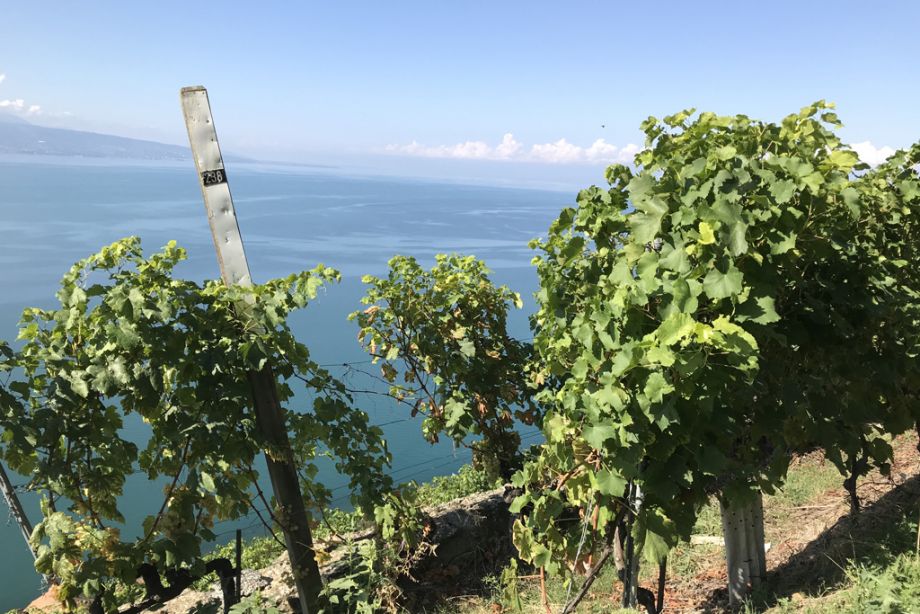 The place where Route de la Corniche and Chemin du Dézaley meet is a place-name spot known as La Chapotannaz. Many horse-drawn trailers passed this way, carrying wine, en route to German-speaking Switzerland during the occupation by Bern. Some headed up to Chexbres following the Chemin de la Tour de Marsens, while others went down to the lake, under Les Abbayes, and from here the wine was carried by boat to Lausanne.

This spot inspired the celebrated painter Rodolphe-Théophile Bosshard (1889-1960), the rare painter who wanted to turn his back on the lake. His painting, La Chapoannaz, recreates, with volumes that are almost cubist in style, the steep route of the Corniche between Chexbres and Epesses. The pyramids of settlements in the vineyard area were also the main subject of paintings by Steven-Paul Robert (1896-1985), the much-praised painter so dear to Gustave Roud. The lake is present only as a backdrop against the walls or in a haze with greenery.